Finally I decided to write about configuring Jenkins server, which is absolutely must have tool for any software project. This is how project itself describe what Jenkins is on their own web site:

In a nutshell Jenkins CI is the leading open-source continuous integration server. Built with Java, it provides 1009 plugins to support building and testing virtually any project.

That’s not going to be a full tutorial on how to do a perfect configuration of Jenkins, I am targeting simplicity and as a result goal of this tutorial is providing quick and dirty way to set everything up and have it running ASAP. It’s sort of Jenkins servers in a nutshell for busy entrepreneurs. Also I am going to limit this tutorial only to my system which is Ubuntu and I am planning to use Jenkins for project written in PHP, so all tools going to be for PHP as well. Let’s start with Jenkins installation. First step is to add Jenkins repository for Ubuntu and install package. First adding key

All those installation steps were taken from http://pkg.jenkins-ci.org/debian/

Once installed you would have next folder created for you /var/lib/jenkins that is basically default location of the Jenkins, sort of home folder of the server. Also it should be immediately accessible at http://localhost:8080/

Please type that URL into your browser and let’s install all necessary plugins for PHP. To install plugins go to “Manage Jenkins”-&gt;”Manage Plugins”

and then open tab “Available”. For PHP we would need next plugins:

Select all of these and then click “Download now and install after restart” and on status page they conveniently offering checkbox “Restart Jenkins when installation is complete and no jobs are running”, so I took advantage of that option.

If installation happens way too fast it could appear that Junkins got stuck at few last options, what I think happened is plugins got installed and then Jenkins was restarted, but screen didn’t get refreshed because previous instance of Jenkins was gone, otherwise you’ll get something like that:

Now we have all plugins ready to go, I guess it’s a time to create a first job, but remember goal is to get up and running as fast as we possibly can, so I’ve discovered jenkins-php web site and turned out to Sebastian Bergmann who happened to create a template on his site. Let’s add that template into our setup of Jenkins and for those who are wondering I’ve chosen manual path:

Once that done go to “Manage Jenkins”-&gt;”Reload Configuration from Disk”. After configuration is reloaded you will be redirected to a dashboard where new job “php-template” going to appear. Right after that you could start messing with it, but I’ve opted to use “php-template” as a true template. So I’ve decided to create new job. Click “New Item” then enter a name and from radio button options choose “Copy existing item” and then start typing php-template in the box and you’ll be offered it for selection. Go ahead and select php-template there. Then click Ok. 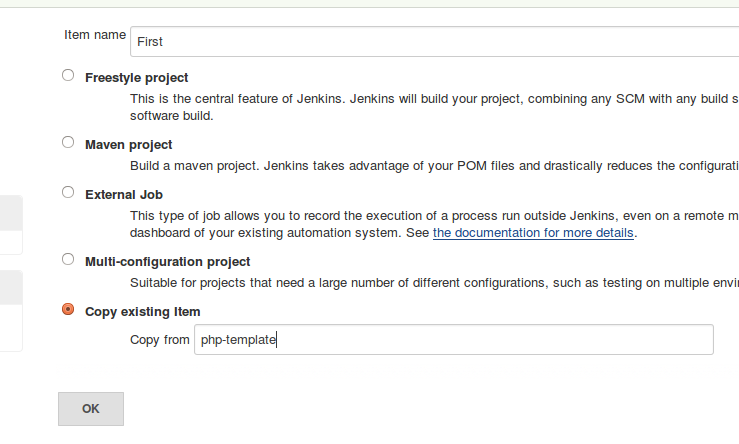 You will be taken to job configuration script, so I’ve changed description box and hit “Save”. Once it’s saved you’ll see name of your project and notice that it is currently disabled, so go ahead and hit “Enable” button just next to that notification. Now if you go back to the dashboard you will see 2 projects and “Schedule a build” icon next to your project. I called my project “First”, so in the rest of this tutorial I am going to use this name for reference. Now let’s install few more tools which Jenkins would need to run a first build. Those tools are Ant and JDK:

If you have several versions of openjdk installed, for instance I had version 7 as well as version 6 installed, please run next command and choose version 7 as your default:

So now let’s try to run a build, which I am fairly certain that will fail. But first enable auto refresh of the screen to help you see what the status is. Hit “Schedule build” to see a very first failure, which is going to be:

You could see that message by clicking #{number} on the dashboard for your project which represents latest build and then choosing “Console Output”.

Another positive effect we’ve got from running that first failure is that Jenkins created all necessary folders structure under your project’s folder, remember my first project called First.

So we clearly need to create that build.xml file, however as I said before our goal is have it running as soon as we can, so we going to borrow build.xml from … you guessed correctly Sebastian Bergmann, you could find it here:

Now we will need to create couple more folders and add source code into appropriate place.

Now it’s a good time to copy your source code into src folder and your tests into tests folder(you could potentially leave tests folder empty, but would have to enable one extra options, I’ll cover it later) after that we can change ownership of those files, I am pretty sure it’s not necessary, however I just trying to avoid any unnecessary failures during Jenkins run.

Project is almost ready, now we need to install couple tools, because those are going to be used during Jenkins run. But first lest switch to some temp folder to avoid any mess in any other place:

Now let’s add default conf file for it, I simply took one from http://jenkins-php.org/configuration.html and placed it into /var/lib/jenkins/jobs/First/workspace/build/phpmd.xml

Again  I took example from same page and put it into  /var/lib/jenkins/jobs/First/workspace/build/phpcs.xml

After that we need to create a simple phpunit.xml you could find it here once downloaded place file into  /var/lib/jenkins/jobs/First/workspace/build/phpunit.xml. However I did few changes there, I removed all entries related to bootstrap.php and append all folders path with ../ otherwise it will be looking into wrong folders.

Just in case I have installed xdebug package since I know that xdebug is going to be invoked to generate some metrics.

Then install xsl extension for PHP:

After that we would also need a config file for phpdox and put it into workspace/build folder:

Edit phpdox.xml file and replace /src with /../src in “project” tag, remove /docs from “generator” tag and then change “html” to “api” in “build” tag. Here is quick diff: 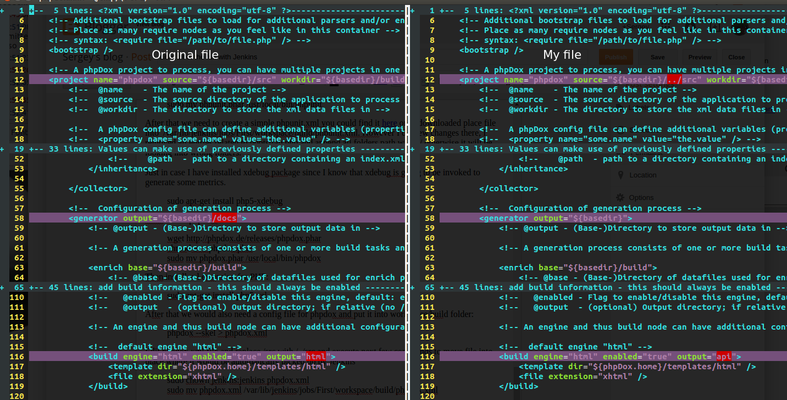 So that’s it technically you could run things and potentially will get successful “Unstable” build. Last thing I’d like to mention is if you have no test cases you better enable next option or xUnit will fail build.

For the most part that’s it in terms of having your first build, there is a good idea to change security settings if you are not the only person on your network. Good luck!